In Music and Life, Neshama Carlebach Following in Father’s Footsteps 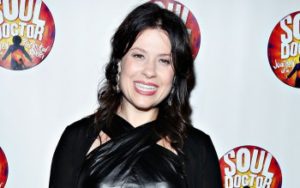 (JTA) — As the August premiere of the Broadway musical “Soul Doctor” drew to a close, the daughter of the show’s subject, the late Rabbi Shlomo Carlebach, took to the stage.

Neshama Carlebach invited the cast and audience to join her in singing her father’s legendary hit, “Am Yisrael Chai,” which became widely recognized as an anthem for the Soviet Jewry movement. The refrain, “Od avinu chai,” translates as “Our father lives on” and is derived from the question Joseph asks his brothers in the book of Genesis.

Although “Soul Doctor” is slated to close on Sunday after 32 preview performances and 66 regular performances, there was no mistaking the significance of the lyrics.

“This was the culmination of 10 years of work,” Carlebach told JTA. “It was a moment of triumph for my father that he was on Broadway. But it was another step in the journey. I know there is more work to be done.”